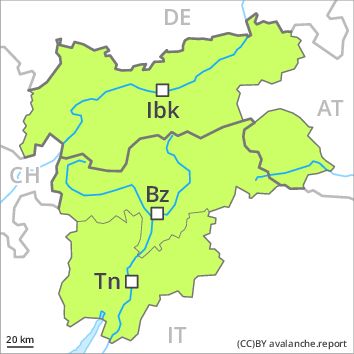 A favourable avalanche situation will be encountered over a wide area.

A latent danger of gliding avalanches exists, in particular on steep sunny slopes below approximately 2400 m as well as on steep shady slopes below approximately 2000 m. Areas with glide cracks are to be avoided as far as possible.
Dry avalanches can in isolated cases be released in the old snowpack, mostly by large additional loads, in particular on very steep shady slopes as well as adjacent to ridgelines. Medium-sized avalanches are possible. Caution is to be exercised in particular in areas where the snow cover is rather shallow as well as at transitions from a shallow to a deep snowpack. Restraint should be exercised because avalanches can sweep people along and give rise to falls.

In some places relatively hard layers of snow are lying on old snow containing large grains, in particular on shady slopes at high altitudes and in high Alpine regions as well as adjacent to ridgelines.