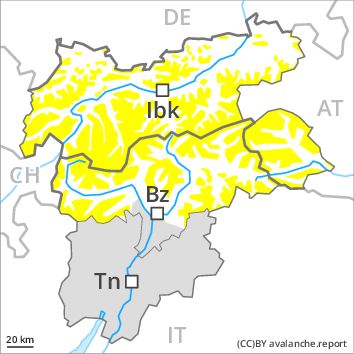 The avalanche danger will increase, in the regions exposed to a lot of fresh snow especially.

The Avalanche Warning Service currently has only a small amount of information that has been collected in the field.
During the course of the night as a consequence of the snowfall there will be only a slight increase in the avalanche danger to level 2 (moderate). The wind will be light to moderate over a wide area. Adjacent to ridgelines and in gullies and bowls small wind slabs will form. Avalanches are rather small and can be released in isolated cases by a single winter sport participant. As the day progresses the likelihood of avalanches being released will increase a little. The number and size of avalanche prone locations will increase with altitude.

In some regions 10 to 20 cm of snow, and even more in some localities, will fall above approximately 2000 m. Individual weak layers exist deep in the old snowpack on steep shady slopes, especially above approximately 2800 m in areas where the snow cover is rather shallow. At low altitude no snow is lying.

Slight increase in avalanche danger in particular in the regions exposed to heavier precipitation. 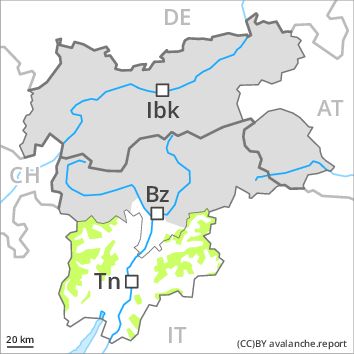 Slight increase in danger of moist and wet avalanches as a consequence of the rain. This applies below approximately 2400 m.

The Avalanche Warning Service currently has only a small amount of information that has been collected in the field.
Over a wide area light rain below approximately 2400 m. The snowpack remains in most cases moist. Moist and wet avalanches require caution. In some regions some fresh snow above approximately 2200 m. As a consequence of fresh snow and wind individual slab avalanches are possible, but they will be mostly small.

Slight decrease in danger of moist and wet avalanches as the snowfall level drops. As the snowfall becomes more intense the avalanche prone locations will become more prevalent on Thursday. The fresh snow must be evaluated with care and prudence above approximately 2400 m.