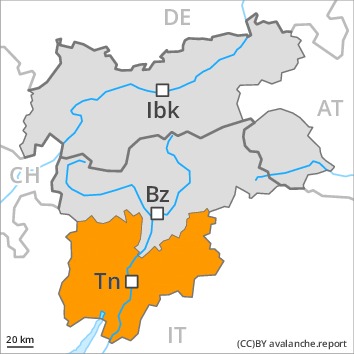 Gradual increase in danger of moist and wet avalanches as a consequence of warming during the day and solar radiation. In some places moist avalanches can also penetrate deep layers and reach quite a large size.
In addition an appreciable danger of gliding avalanches exists. Areas with glide cracks are to be avoided.
The somewhat older wind slabs are to be evaluated with care and prudence in particular in rocky terrain. They can be released, especially by large additional loads, on steep shady slopes above the tree line.
Backcountry tours should be started and concluded early. Off-piste activities call for a certain restraint.

The meteorological conditions facilitated a gradual strengthening of the near-surface layers in particular on sunny slopes. The no longer entirely fresh wind slabs remain in some cases prone to triggering on steep shady slopes.
Faceted weak layers exist in the centre of the snowpack in particular in areas close to the tree line. This also applies in gullies and bowls below the tree line.
Towards its base, the snowpack is wet and its surface has a melt-freeze crust that is not capable of bearing a load.

As a consequence of rising temperatures and solar radiation a sometimes critical avalanche situation will develop during the next few days. The avalanche danger will increase significantly during the day.